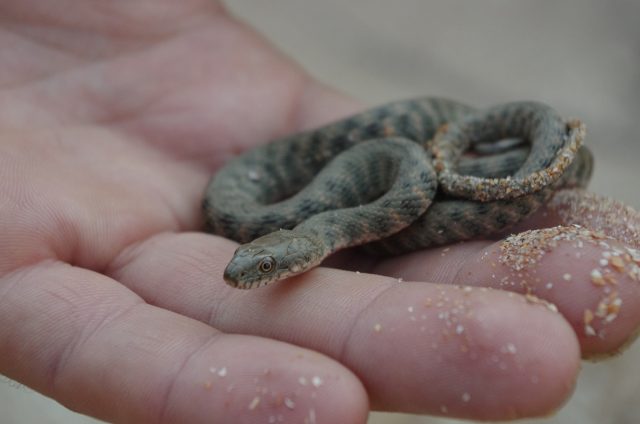 Snakes and Us Part 2: Safe Response

From time immemorial, India has been the land of snakes, so it is not uncommon to encounter one indoors or outside in your garden, compound, field, farm or forest. Common sense and calm should be your default setting when responding to a snake.

If you are in the outdoors and happen to see a snake, just ignore it and move on. Farm, field and forest (and urban habitats too) are completely natural habitats for snakes and there’s nothing you should or can do about it. 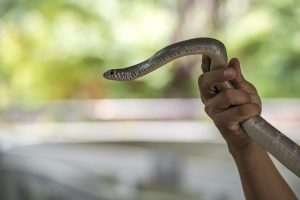 That said, it is imperative to follow basic protocol, that is: never, ever approach the snake or attempt to handle it. It is perfectly harmless to observe but always maintain a minimum distance of 5 feet to 8 feet from the snake, ideally more.

Indoors
If you find a snake indoors, here are some simple steps to follow:

Never touch, approach or attempt to handle the snake in any way or at any cost, even if it appears or actually is dead. Research has shown that handling or attempting to handle a snake increases your chances for snakebite; stay away and your chances are minimum to zero.

Select a monitor to keep an eye on the snake. S/he should be on high alert, keep their eyes on the snake and know where it is at all times. This is the sole responsibility of the monitor and is not to be taken lightly. Appointing more than one monitor would be better, as long as they do not get in each other’s way.

Clear the room of all living things, especially children and pets. Large groups are chaotic and often increase the chances for accidents to occur. Further just a couple of people (two or three) are sufficient to safely manage the situation.

Crowd management is key. The only thing that can make the situation worse is mob mania.

Maintain a safe distance from the snake at all times; between 5 to 8 feet away is ideal.

Contact the local wildlife management body/person in charge. Speaking strictly from an urban point of view, most cities have the system of ‘rescue’ for wildlife that is encountered within human habitation. This number can be easily acquired from information services. It is very, very important that you contact a responsible, reputed and trustworthy person/organization as there are many ‘phonies’ and ‘heroes’ in the ‘business’ of so-called snake ‘rescue’. It would be best if you already had this number stored as part of your emergency contact list, so that you are not running helter skelter trying to find someone last minute.

Block all entry/exits so that the snake has no way of moving within the house or escaping without your knowledge. Remember, this is a snake so entry/exit can also be something as slim as a crack in the wall or an open window.

Cordon off all further entry indoors to make sure that you do not lose sight of the snake to an unknown location within your house. It would be time consuming, near impossible, to locate the snake again and you don’t want to have the rescuer arrive, not find the snake, go back and be forced to live with the doubt of whether the snake is still around or not. This harbors fear unnecessarily.

Rescue operation: oblige the rescuer in any way that s/he may require. Do not offer your inputs or two pence; the response is simple, retrieve the snake, bag it and remove it from inside the house. If the rescuer wants a pillow case or PVC pipe, source it out, if s/he requires rope, get it done, if s/he needs you to clear a room, act on it immediately. Remember, time is of the essence; do not waste it on discussion, deliberation or opposition – trust the expert on the scene, this is important. With able assistance and if the snake can be immediately pointed out by the monitor on arrival of the rescuer, the entire operation should take no more than 10 minutes.

Release operation: The correct protocol to be followed – be it venomous or non-venomous – is that the snake needs to be released within a 50-meter radius of your home. Why?

Relocation of the snake (that is releasing/relocating it to a site different from where it was rescued) causes severe damage and imbalance on three counts: to the snake, humans and the ecosystem at large.

Translocation (of the snake) is a death sentence to the animal, and by doing so you are reducing its chance for survival heavily.

5 Reasons Why You Should Add French Doors to Your Home