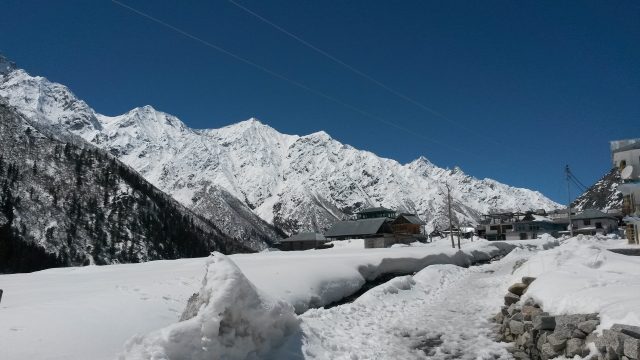 Skip the popular touristy hill stations this year. Instead head off the beaten path to Kinnaur with its high peaks and beautiful valleys instead. Commune with nature, enjoy pristine mountain vistas and indulge in some adventure.

Instead of run-of-the-mill hill stations like Manali, Kullu, the oh-so-crowded Shimla or even others such as Dalhousie and McLeodganj that are overrun by tourists, taxis and buses full of visitors, consider Kinnaur this year. While you can visit the area throughout the year, there may be places that are inaccessible in winters and which could become completely cut off after heavy snowfall. Also, there is a higher likelihood of landslides during the monsoons so you should plan accordingly. April-May and Oct-Nov are good months to visit.

Here are some reasons to visit Kinnaur and points to include in your itinerary:

Off the beaten track 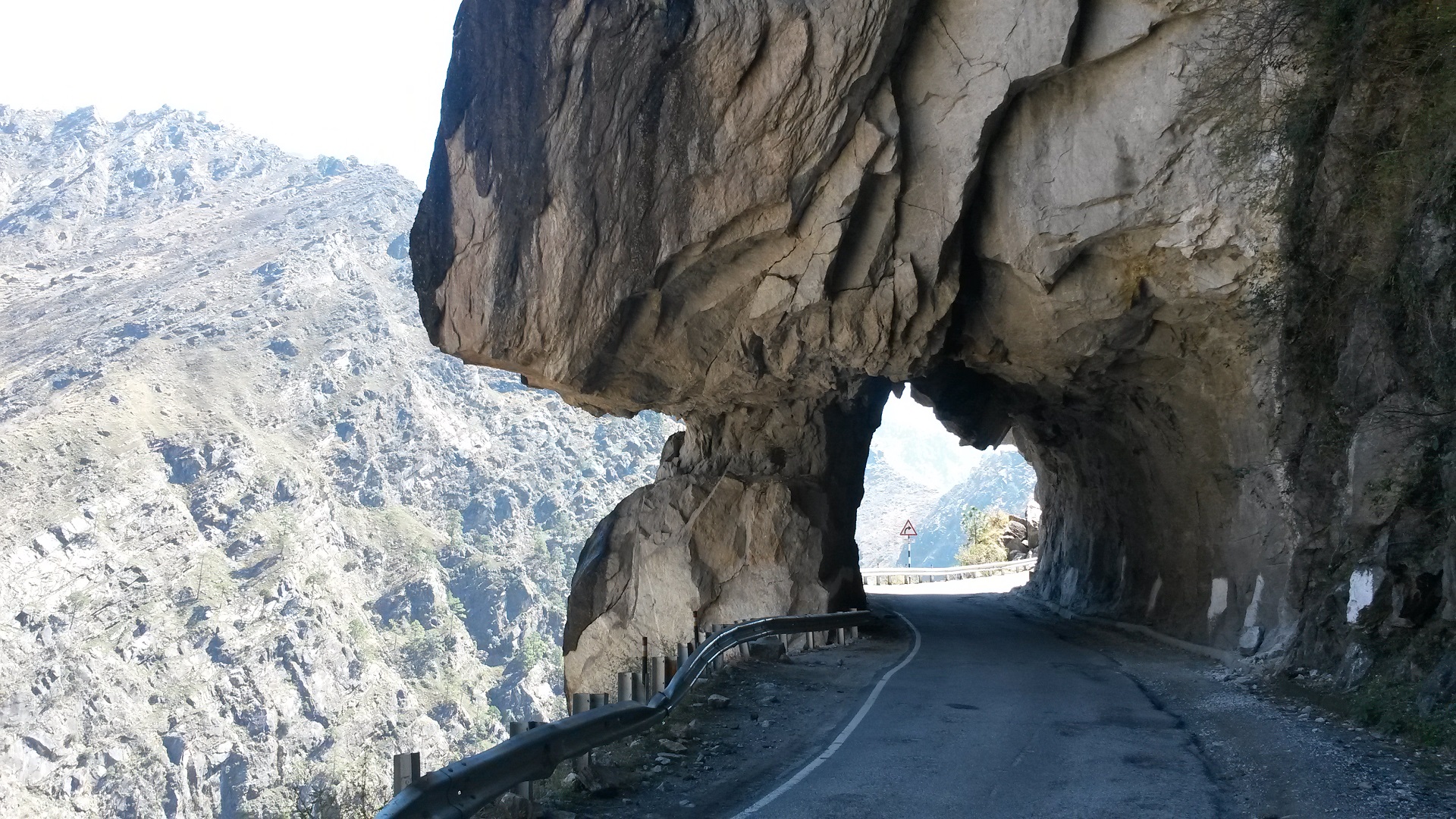 While most of the popular tourist destinations of Himachal Pradesh are towards the south or the west of the state, Kinnaur is the state’s easternmost district and therefore is literally off the beaten path. It borders with Tibet on one side, making it more remote and less accessible than other parts of Himachal. The area consists of valleys – Spiti, Sutlej and Bapsa – and the Zanskar and Himalayan mountain ranges.

Being higher than the popular hill stations of HP, most of which are between 1,500 and 2,100 meters above sea level, Kinnaur is located at altitudes ranging from 2,320 meters to 6,816 meters. This means that winters are longer here and the area is snowclad for longer durations of the year. It is also one of the country’s smallest districts by population. So it is sparsely populated. The district is dotted with small charming hamlets that are still more or less unspoiled by tourist influx.

Towering to a height of 6,050 meters, Kinner Kailash (different from Mt. Kailash in Tibet) is the second highest peak in the area, Jorkanden (towering up to 6473mt) being the highest. Kinner Kailash has religious and cultural significance and is also a scenic marvel and challenge for adventure seekers.

The peak is holy for Hindus as well as Buddhists and many consider a parikrama (circumambulation) of the mountain a worthy endeavor to undertake. There are several local legends associated with the mountain. The Kinner Kailash has a natural outcrop of rock that resembles a Shiv-ling; many people complete the difficult and arduous trek up to this point for religious reasons and also as an adventurous and challenging trek. 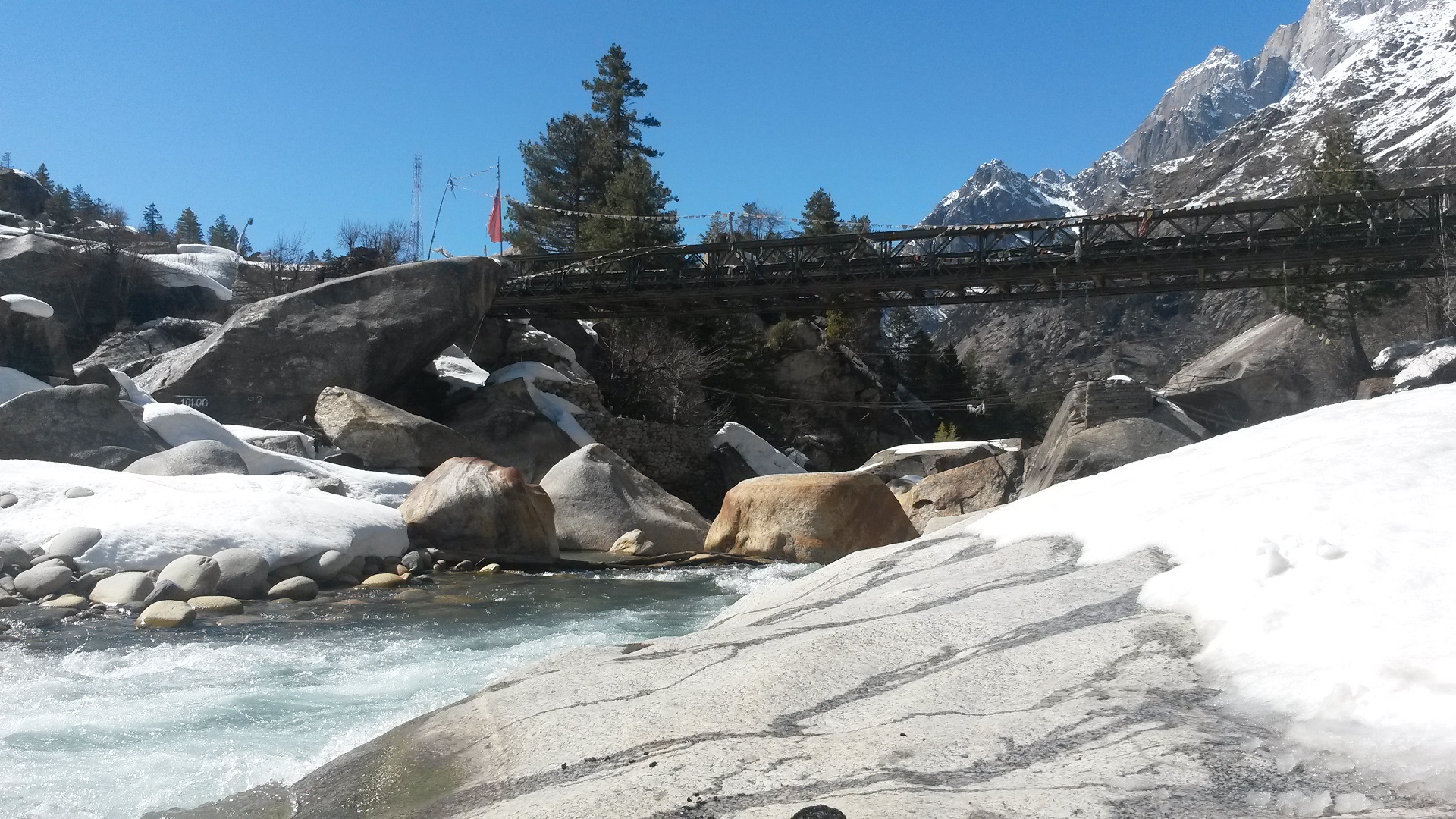 There are several trekking routes and rock climbing options in Kinnaur; you can choose one that is suitable to your level of fitness and sense of adventure. While some treks are relatively short – 8 to 10 kilometers one way; others are over 30km long with the added excitement of a night or two spent in caves. You can also enjoy some paragliding, river rafting and other adventure sports here. For some months of the year, skiing is also possible here.

It is scary, spectacular and thrilling! As a road trip (or if you’re really adventurous, a motorcycle trip), this one is full of awesome sights and a few skipped heartbeats as well. Driving through Spiti valley along NH 22 – often described as one of the ‘world’s deadliest roads’ – can be awe-inspiring. Parts of the road are in poor shape, but there are lofty peaks, lush landscapes and quaint little villages to make up for this. The road surface is quite bad in bits so it is advisable to try this only with a hardy 4×4 vehicle.

NH 22 became rather famous when the Imtiaz Ali movie ‘Highway’, starring Alia Bhatt and Randeep Hooda, was extensively shot here. The Discovery Channel’s program about the road also catapulted it to fame. However, you should find out the latest news about the surface of the road and about any recent landslides that could be blocking part of the road before your visit.

When traveling by road, most people touch Narkanda first. This is a small village with apple orchards, ski slopes, and the Hatu Peak. There is a good dhaba in town if you want to have a meal. Sarahan, with its lovely stone and wood Bhimkali Temple is another attraction next on the route. You can stay at the HPTDC hotel, Shirikhand, or on the temple premises itself in guestrooms for a very nominal charge. It is a beautiful place and it may be worth your while to stay and explore. Kalpa and Roghi villages are picturesque places to visit. Kalpa is especially recommended for some rather spectacular sunrises and sunsets. The surrounding peaks turn a marvelous golden in the mornings and evenings. Roghi is only accessible during summer so one would have to check whether the roads leading there are open when you plan to visit. 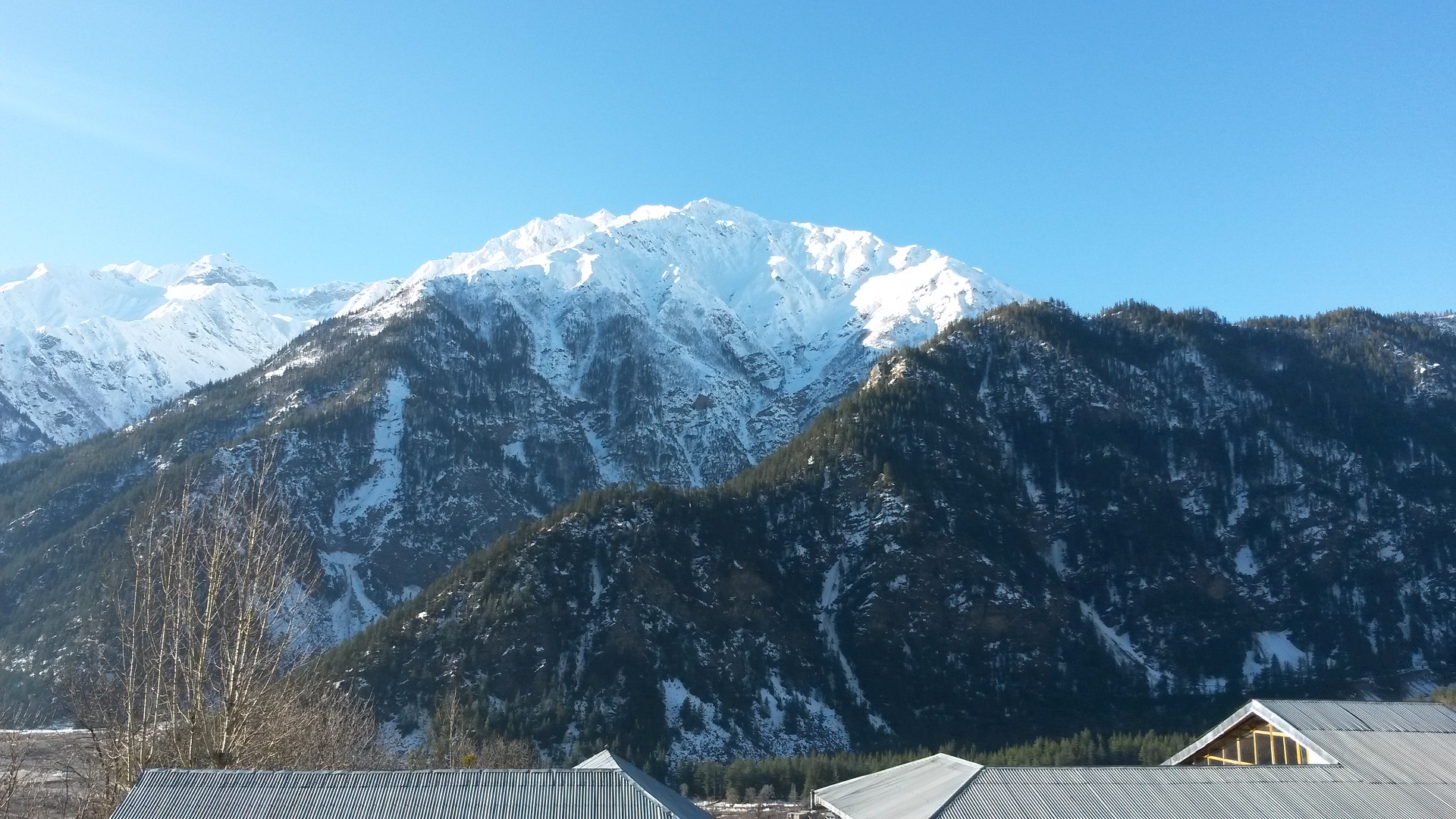 Sangla with its picturesque peaks is another possible addition to the itinerary. There is the Mamru Fort here and a trout hatchery worth a visit. Chitkul village with its challenging approach road, streams, pastures and meadows is also worth a visit. Chitkul is also the last inhabited place closest to the Indo-Tibet border. There are several trekking and hiking trails in the region.

Tabo with its tall, forbidding topography and famous monastery is another place to include in your itinerary. From here on we move out of Kinnaur and into the Lahaul & Spiti district due north. The monastery here is a World Heritage Site and is listed as one of the world’s hundred most endangered monuments. There are terrific views from here. 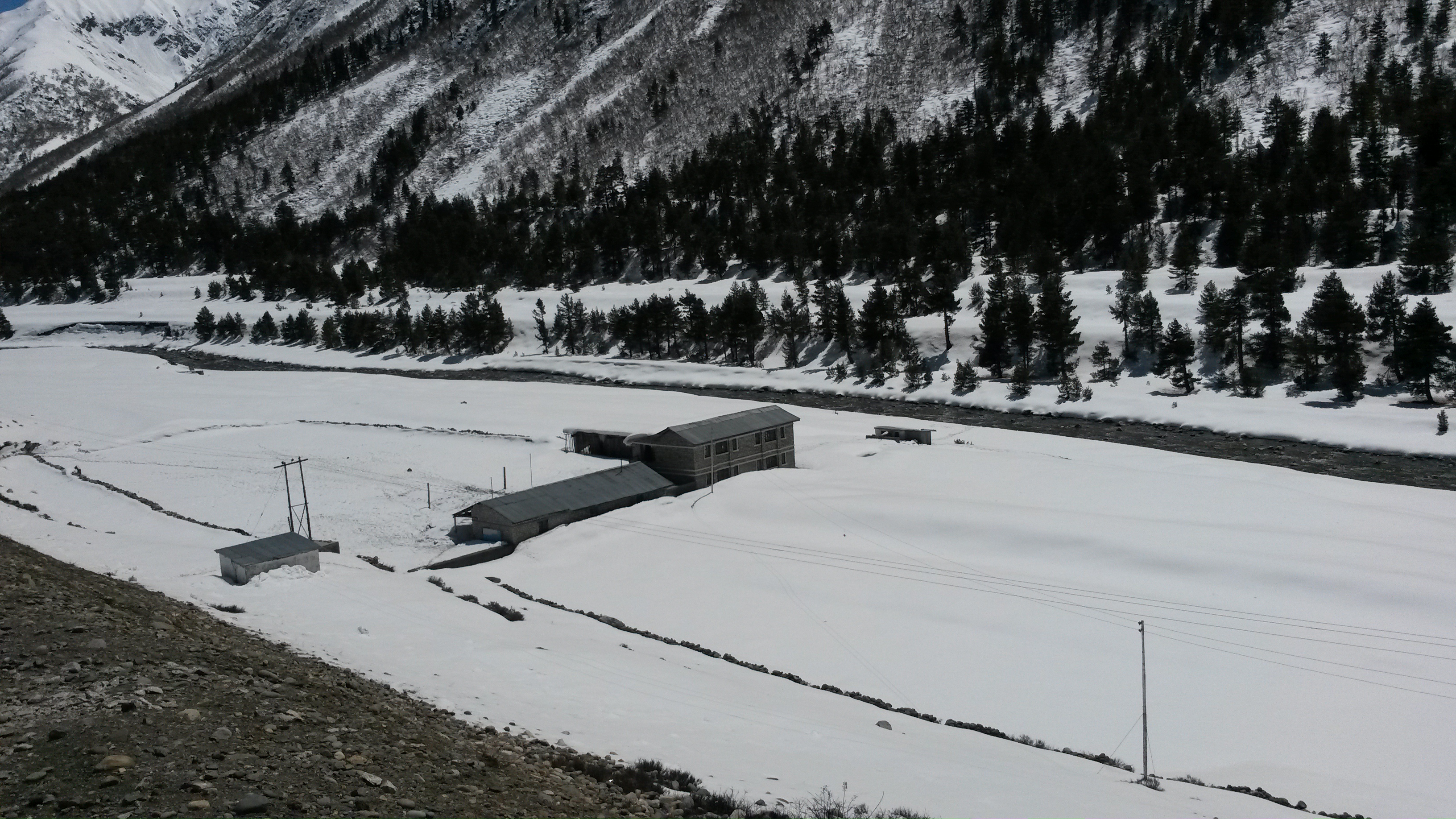 Kaza is the capital of Spiti and boasts several hotels, a market and even a German Bakery. About 14km away is the Ki Monastery, and other charming villages to be explored. There is the Langcha village with its temple and big Buddha statue; one of the highest villages in Asia. If the weather permits, it is possible to go up to Kunzum Pass and then drive on to Chandratal, a gorgeous high-altitude lake.

It is important to remember that if you want to visit all these places, you will be on the road pretty much the entire time and that you should be prepared for spending several days on the road, literally. However, you can decide to visit only some and stay on to actually explore the region. Remember, this is not your usual hill station with a dime-a-dozen hotels and other tourist facilities (accommodation options range from basic to mid-range). Rather it this part holiday, part adventure that will create a host of wonderful travel vignettes to remember.

Giving Thanks for Your Food

The Art of Delegating for Business Success

Hacks for Women to Juggle Home and Work

Fishy Love – And the Perks of the Under(water) World