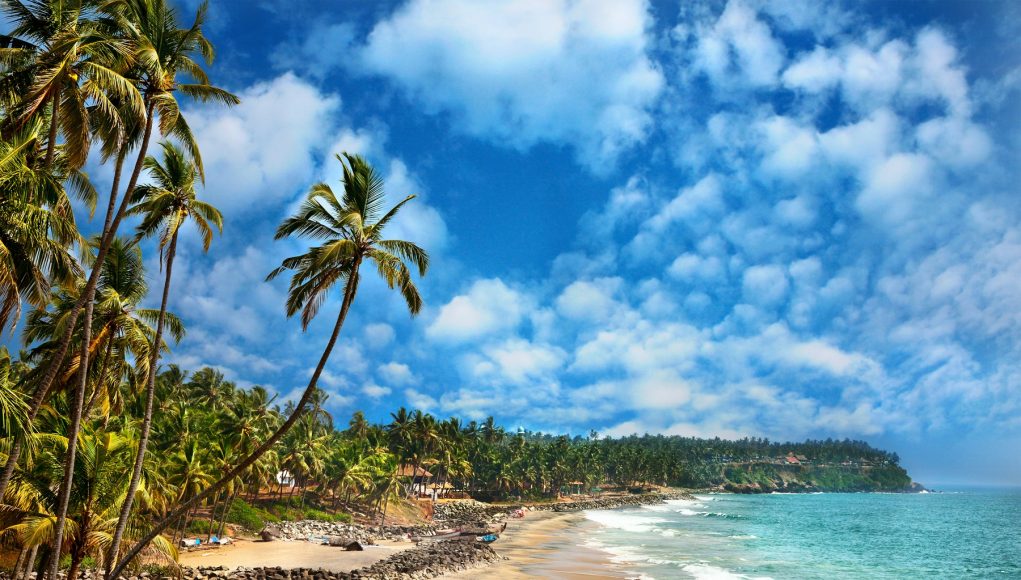 India dazzles with a hundred thousand colors and is truly a world within a world within herself. Our vast sub-continent is a peninsula surrounded by water on three sides. This amazing geographic feature gives us a whopping 7,517 kilometers of one of the most diverse coastlines in the world.

From your run-off-the-mill party beaches to the spectacular coral reefs of the Andaman archipelago – one would need just a couple of lifetimes to experience it all. Lucky for you, we’ve scoured the Arabian Sea, Bay of Bengal and Indian Ocean to put together a list of the best coastal locations, the ones you simply should not miss. Here goes! 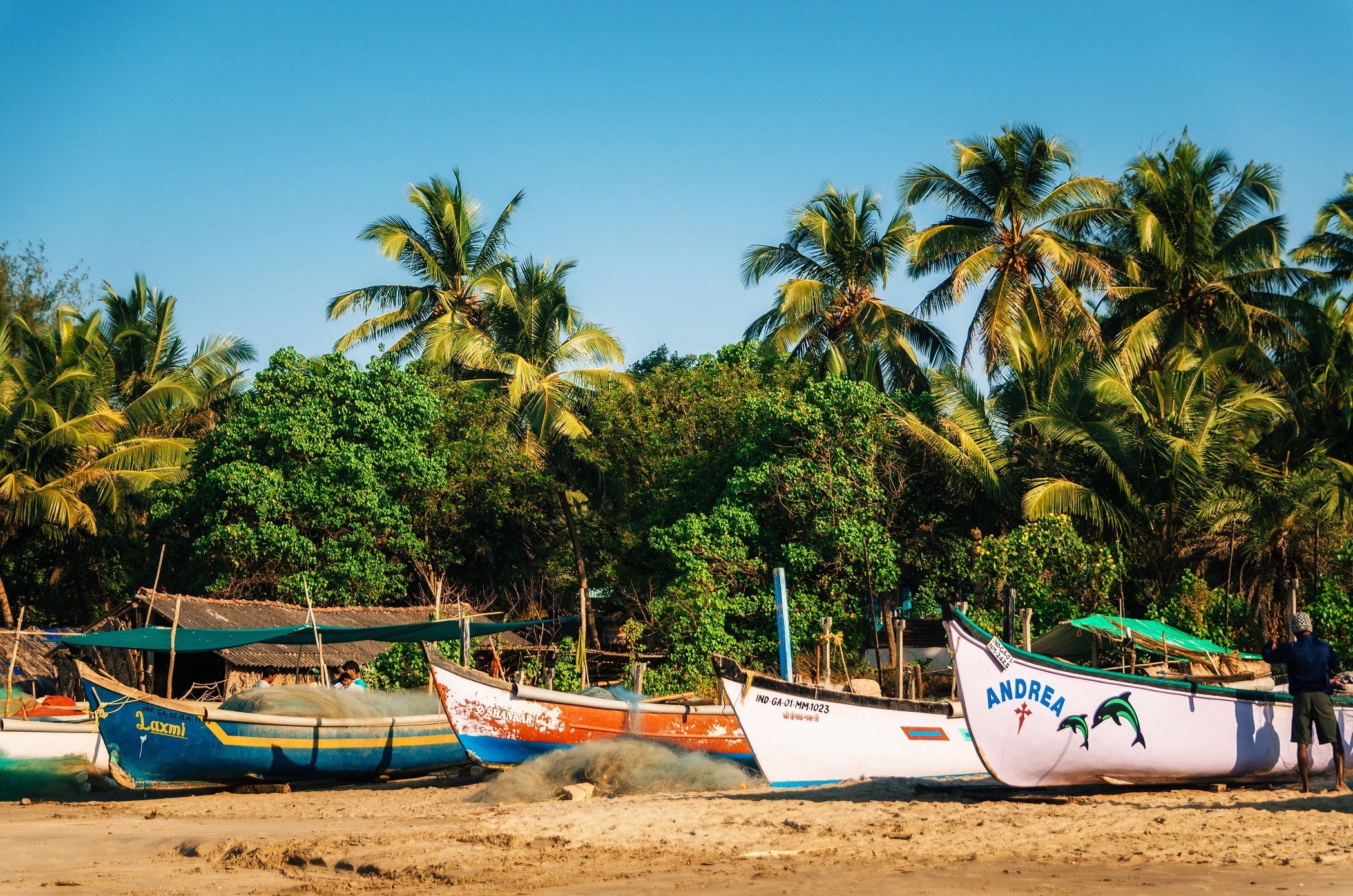 When it comes to beaches, the sunny sands of Goa need no introduction. A household name, this small Indian state undoubtedly tops the list. It sure is hard to find some privacy on a Goan beach, but Morjim, up north on the Goan coastline, (between Ashvem and Vagator) roughly 50 kilometers from Panjim, is ideal to chill. Whether it’s swimming in the calm waters of the west coast or slowly sipping on a chilled Kings beer at a beach shack, Morjim is one of the more quiet getaways of the world renowned Goan coast. 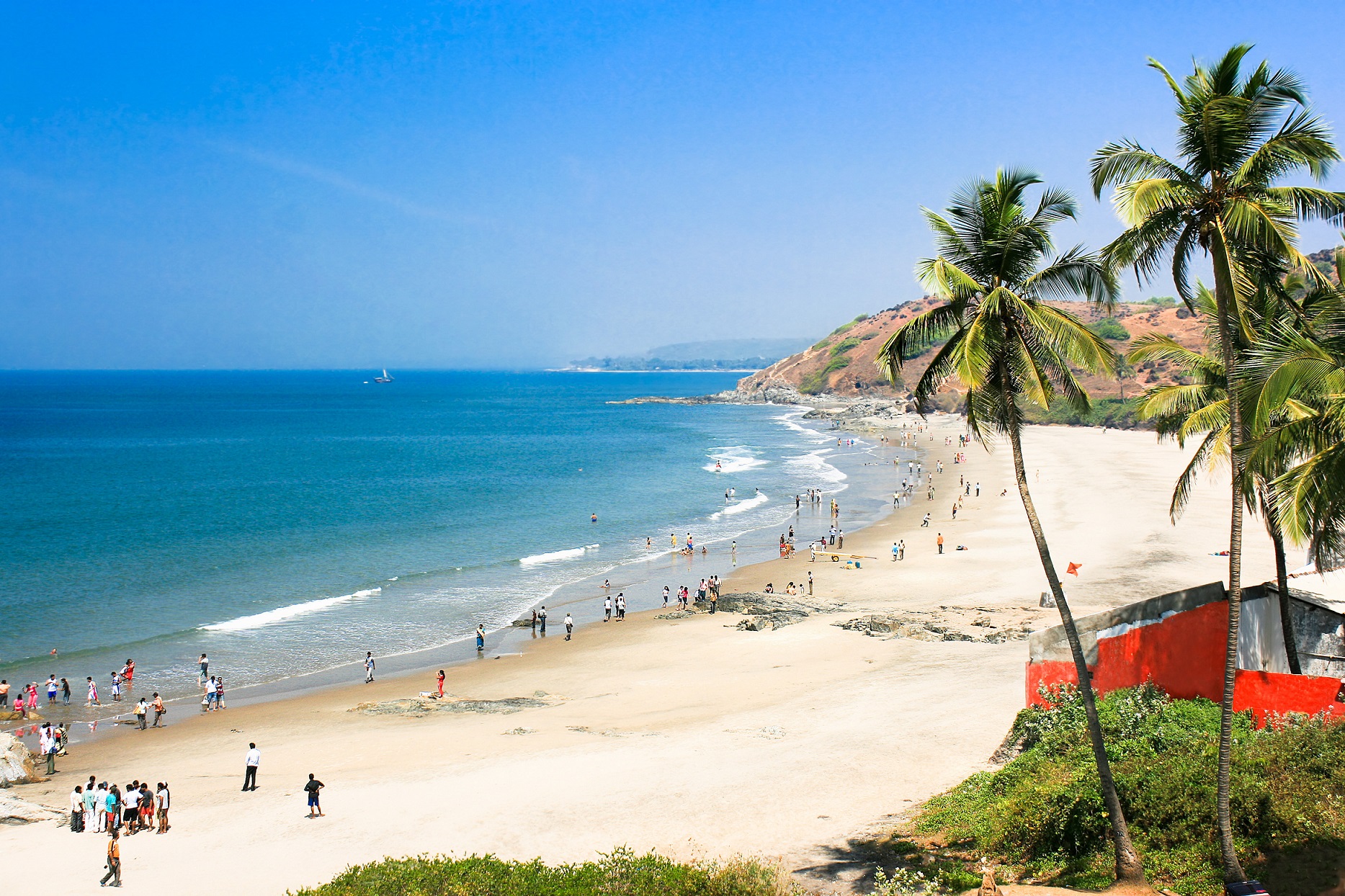 One of the more laidback beaches of Goa, Vagator’s popularity grows by the season. Organically, it has been divided into Little and Big Vagator, a reference well known among locals and tourists. If you’re looking to get away from the noise, pollution, hustle and bustle of the city, Vagator sure is a good pick. 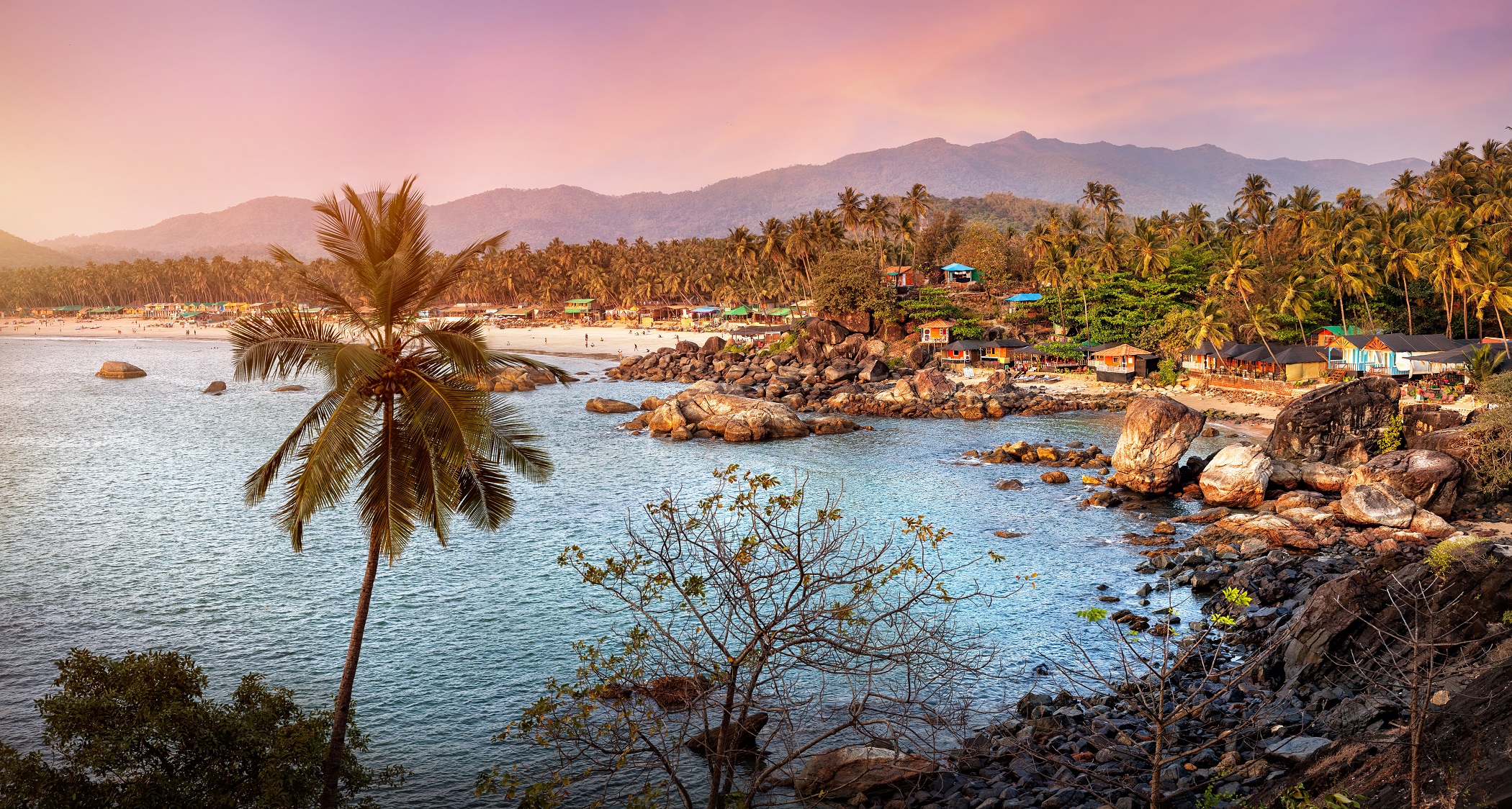 Well known for its crescent shape, Palolem in south Goa is the go-to destination for Indian and foreign tourists alike. Vibrant with diversity and abuzz with party vibes, this is your typical Goan getaway – booze, food, fun and a wild nightlife of course! 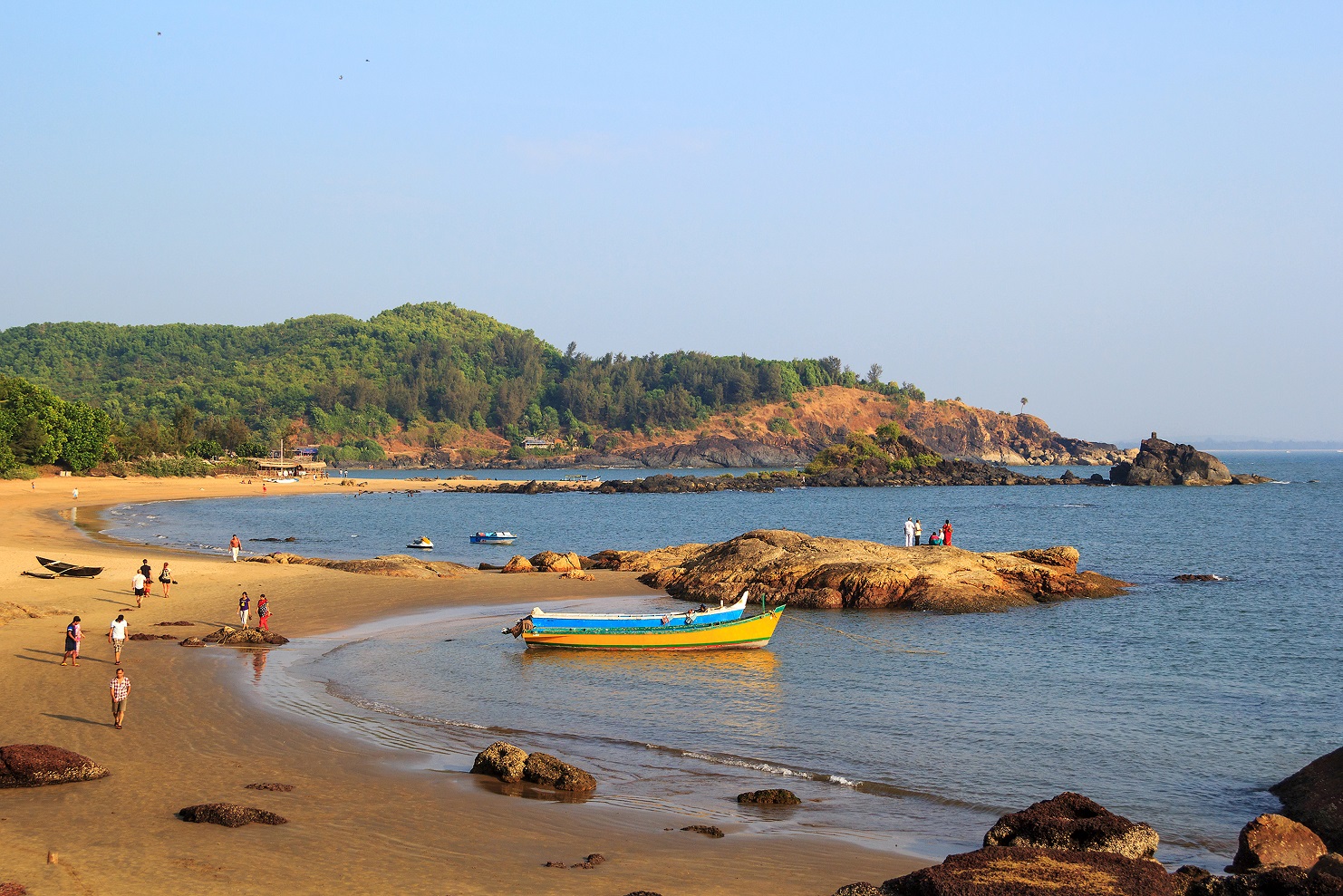 Brilliant red-brown laterite rock forms a three or ‘Om’ shape as waves gently lap its sandy coves. Om Beach in Gokarna has gone from a well-kept secret to a most-loved alternative to the ever-commercial Goa. Om is dotted with cheap and moderate shack accommodations that serve delightful local and international delicacies. Close to the temple town of Gokarna, the beach can be reached by a 30-minute auto rickshaw drive from the main bus stand. What’s great about Gokarna and Om is that one can access multiple beaches by trekking (either side) of its rocky cliffs.

Sounds totally unfamiliar? Well, Kodi Bengre is nestled in a small fishing village in north Karnataka. It is a clean and serene piece of coast with the backwaters a stone’s throw away. What’s more, it is the home base for Shaka Surf Club with whom you can spend action-packed days learning to surf, canoe or simply be at the sea.

Pronounced ‘kaa-pu’, this beach is a local bus ride away from the temple town of Udupi and university town of Manipal. The resident lighthouse brings to it a quaint feeling, while Kaup is wonderful for one-day picnics or family outings.

Also a bus ride away from Udupi, Marawanthe Beach is gaining popularity as a holiday destination. Its proximity to NH17 makes it a great pit stop on road trips, to dip your feet and stretch those cramped muscles. Your view on one side is the glorious Arabian Sea, contrasted by Kodachadri Hills and the Sauparnika River on the other side. You could explore the available adventure sports of scuba diving and snorkeling. 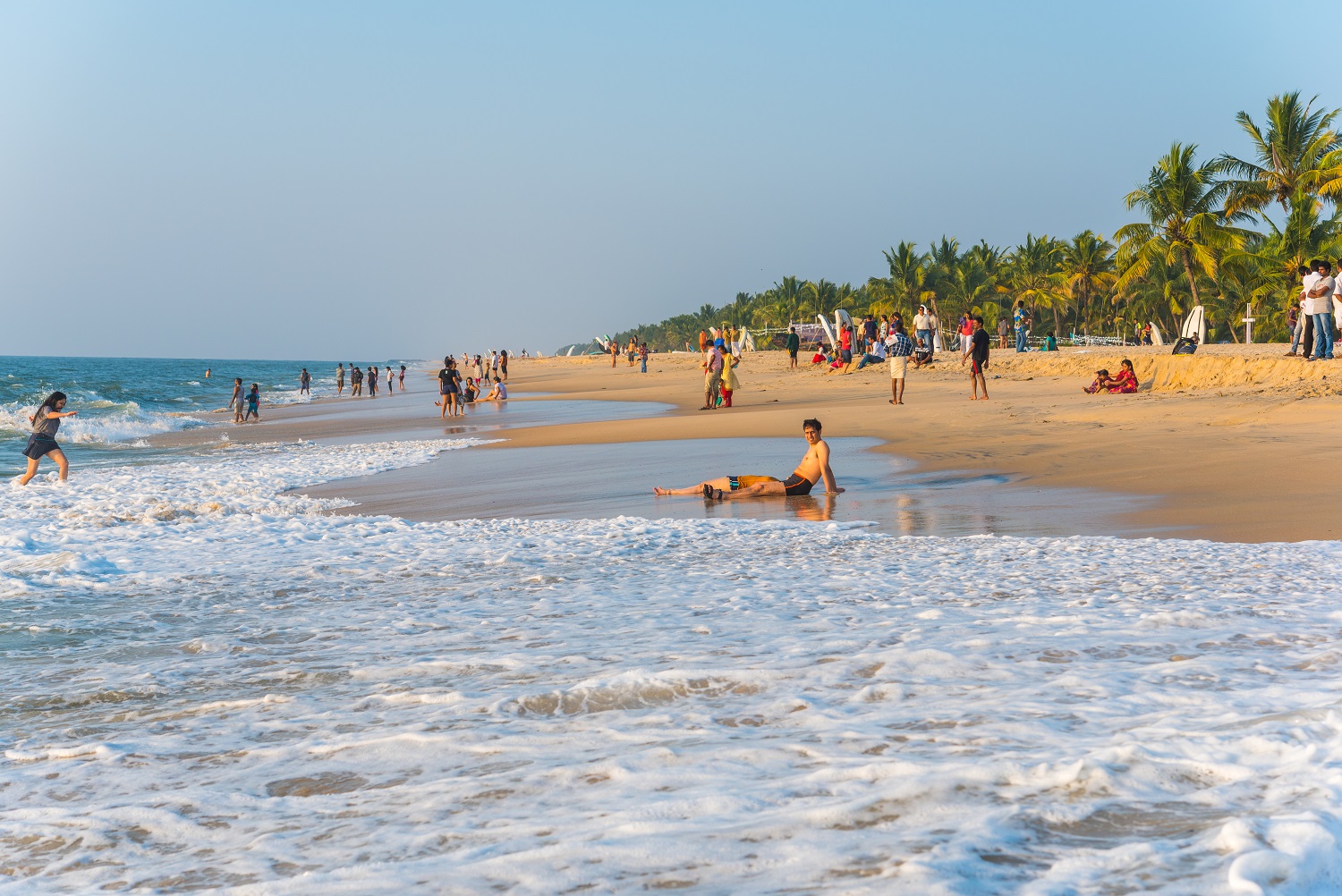 If you’re looking for silence, Marari is your scene. Overlooked and untouched by development, it usually slips off the list of most tourists. Alleppey is nearby and could be the best way to reach it (depending on where you are travelling from, of course). Ideal for holidays that aim to be a combination of the open seas and the endlessly fascinating backwaters of God’s Own Country.

Better known as the ‘Princess of the Arabian Sea’, Cherari is yet another fabulous sliver of Kerala’s coastline. Close to the main city of Kochi, Cherari is all you can hope for – from sandy shores to swaying palms, all of which eventually merge into absolutely stunning backwaters. 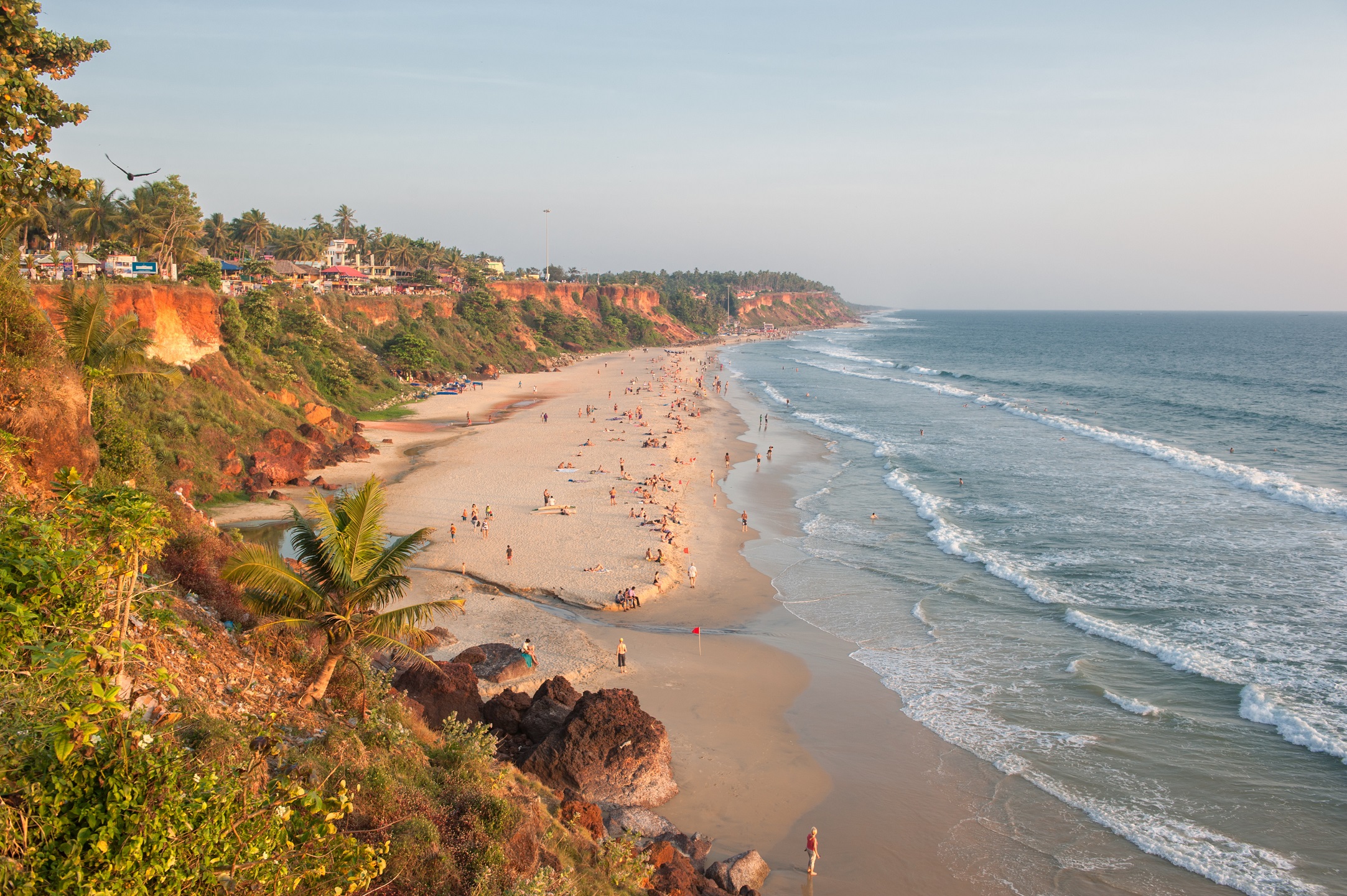 Growing popular by the day, Varkala is definitely one of the more popular tourist beaches to keep your eye on. Black jagged rocks dot the coast as homestays, shacks and lodges offer a variety of sea side accommodation. If all of this isn’t sufficiently convincing, would it help to know that locals believe that one dip in the waters of Varkala washes away a lifetime of sin? 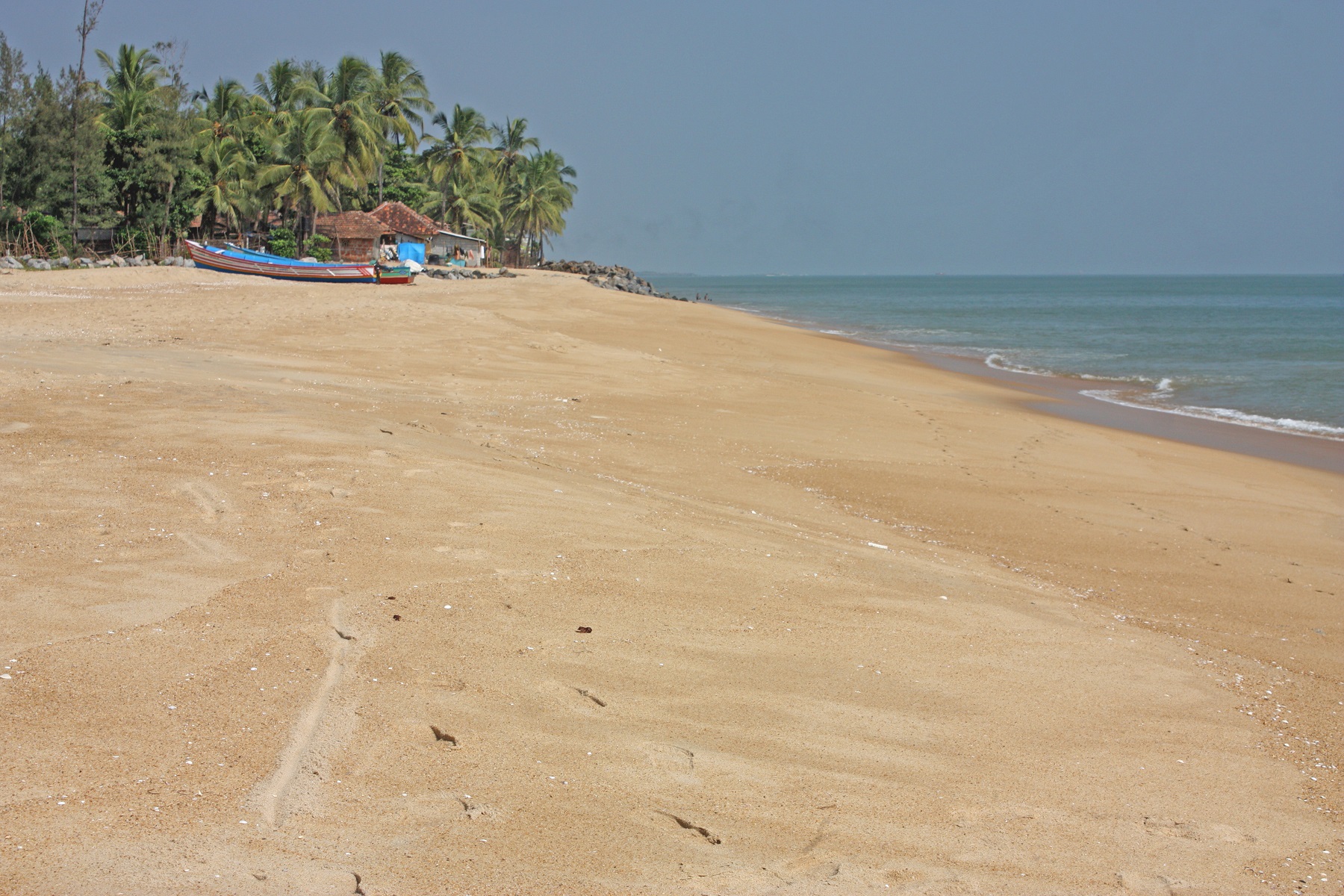 One of Kerala’s better known and thoroughly visited shores, Bekal is worth a visit Dabble in a bit of history and explore the enormous, ancient fort situated on the beach. Super clean, Bekal offers unforgettable panoramas of the setting sun so much so that many popular pictures have been filmed here.

Criminally little is known about beaches in Maharashtra, but Tarkali is a secret that has so far stayed with the well-traveled. A bit of a hassle to get to, Tarkali’s clear waters and sunny skies are a delight. Remember to book your accommodation in advance, and pay a visit to the quaint fishing village nearby. Don’t forget to try the local curries made with kokum, a taste that you’ll carry with you long after the meal is finished. 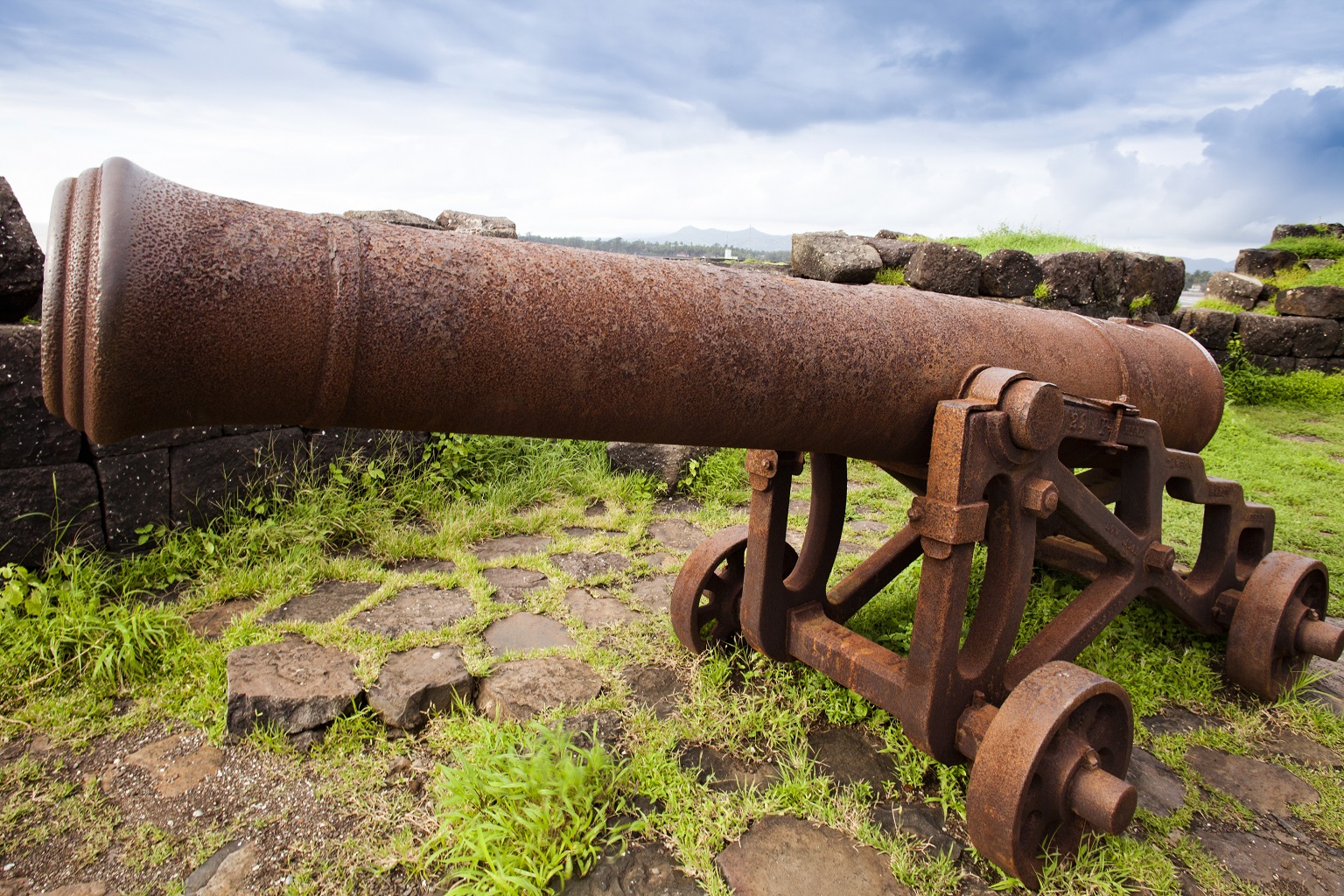 Where movie stars party, Alibaug is an island off the coast of Mumbai. It is easily accessible by ferry from the city’s port. We recommend that you book your accommodation in advance; you could also consider lodging in the nearby (more reasonably priced) town of Kihim. The vast expanse of sand peppered with smooth, dark rock and mangrove-like habitat along the coast make for lifetime memories.

In terms of natural experiences, Gujarat offers diversity like no other; Daman and Dui with its spectacular sea views and pleasing climate is no exception. The best season to visit is between October and May. Chalk in some time to spend observing the extraordinary bird life of the region.

Lakshadweep literally translates to ‘a hundred thousand islands’ and is an experience of a lifetime. Do not miss Bangaram with its deep blue lagoons, waterfalls, colorful coral reef and a host of adventure sports that make it a holiday destination of international standards. Allot a fair chunk of time to your Lakshadweep holiday so you don’t return with regrets!

While the 2004 tsunami may have altered the coastline of Pondicherry (Puducherry) and Auroville beyond recognition, it isn’t enough to feel sea spray – you’ve got to swim! The good news is that Paradise Beach is a hop, skip and boat ride away. Negotiating with the local fisherman is usually your best bet to find a boat to ferry you across. Great for a day trip, pack a picnic, rise early and hope that you see dolphins! 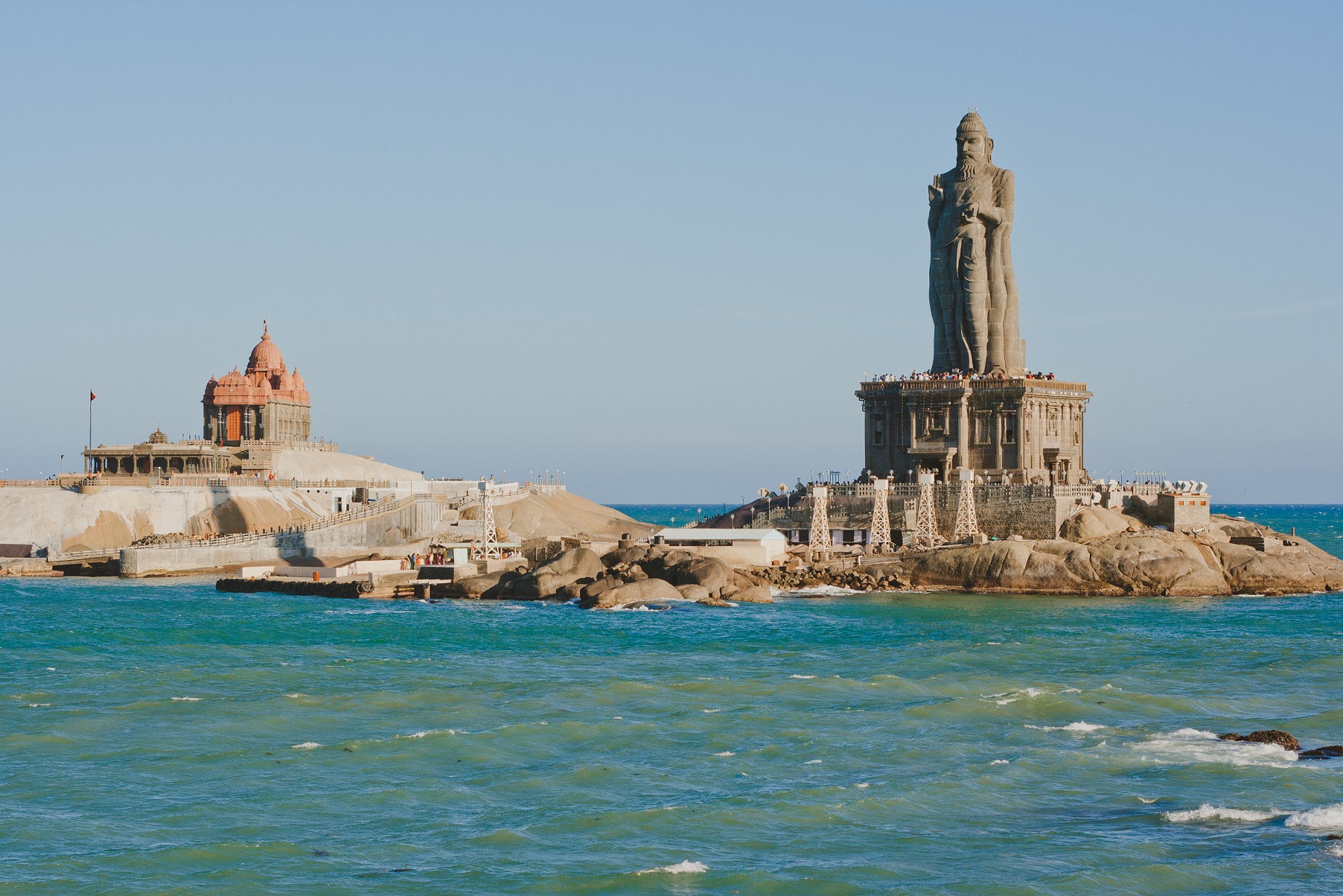 When it comes to extraordinary beaches, Kanyakumari is up there on the list. As the southern-most tip of the subcontinent, it is well known for being the confluence or meeting point of the three oceans that surround the country. While the water is rather rough and is not ideal for swimming, it is fascinating to see the three different colors and textures of sand merge into Kanyakumari’s unique shoreline.

When in Andhra Pradesh, be sure to check out its star attraction – the virgin sands of Rishikonda. Forgotten by tourism and commerce, it is good for swimming and watersports too. Located nearby the city of Vizag (Vishakapatnam), Rishikonda is – hands down – one of the best beaches within reasonable distance. 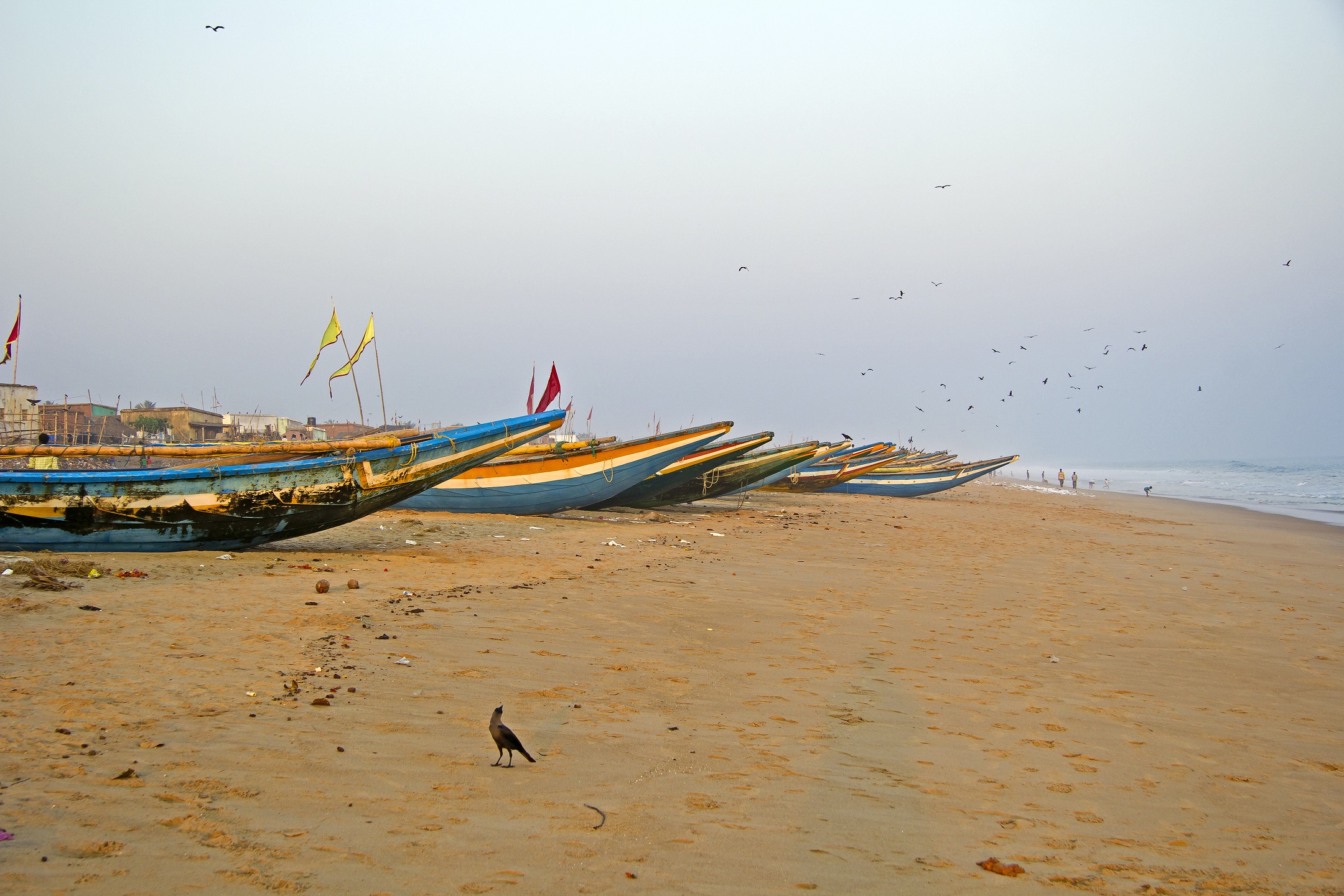 Perched on the mainland where the Bay of Bengal kisses Orissa’s shores, the city of Puri is a coastal delight too. Well known among tourists, it’s a must see when in Orissa. 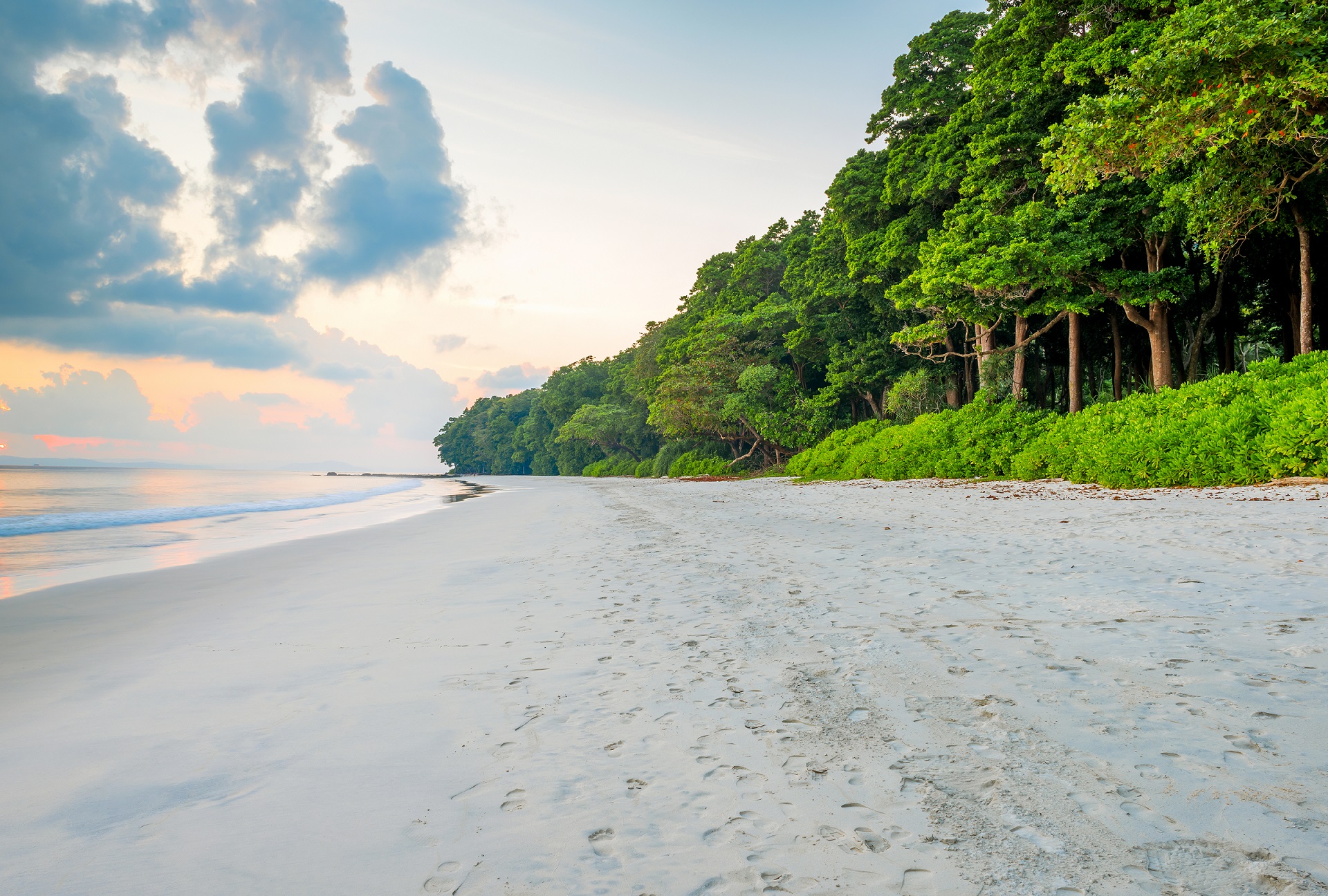 ANDAMAN AND NICOBAR: Beach No. 5 – Radhanagar

Andaman and Nicobar are a group of over 500 islands, geographically known as an archipelago. Select islands are open to Indian tourists and an even shorter list for foreigners, who require special permission to travel within the islands (Nicobar is off limits for both).

Words fall short when describing the eternal beauty of the Andamans. Unlike any other coast in India, you can experience island, ocean, coral reef, mangrove and rainforest biotopes all in one place!

Radhanagar, Beach No. 5 is located on the far end of Havelock and lives up to its international reputation as one of Asia’s best and Top Ten beaches in the world. Water as clear as crystal and sand as white as snow, this one is – without a shadow of doubt – India’s most treasured island. It is with unfettered confidence that we guarantee that Randhanagar will transform your very notion of the ocean!

7 Christmas Games to Play this Yuletide