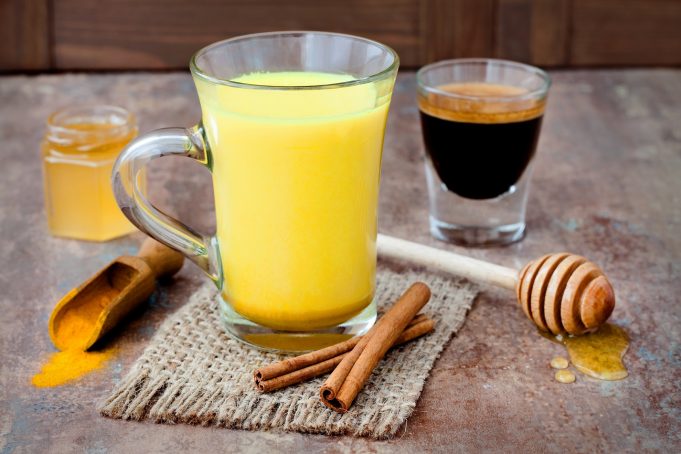 Turmeric Latte, aka ‘Golden Milk’ has become a global rage. Turmeric has been a part of Indian cuisine and our treasure trove of herbal medicine for ages. Let’s unravel the secret behind turmeric’s meteoric rise in the global palate.

Numerous variations of turmeric lattes are doing the rounds of homes and eateries around the globe. This staple drink of the health conscious is a concoction of fresh turmeric juice or paste (made using turmeric powder and water) with non-dairy milk such as unsweetened almond, cashew or coconut milk with a dash of health-enhancing condiments and spices such as ginger, cinnamon, pepper, cardamom and honey.

Warm the non-dairy milk on low heat. Add turmeric, ginger, cinnamon, pepper and cardamom pods (optional). Stir frequently till the milk is warm but not boiling.Mix coconut oil and gently heat. Stir in the honey.If using cinnamon sticks, remove and use again for another drink.Strain the milk through a strainer.

Froth the top of the milk with a milk frother or use a wire whisk or immersion blender to create froth.Top up with cinnamon powder.

You can avoid coconut oil and use coconut syrup instead.

The Secret to Crafting the Perfect Instagram Bio for Your Business

Energy Efficient Homes: Be a Part of the Solution

10 Ways to Recycle Your Old Jeans