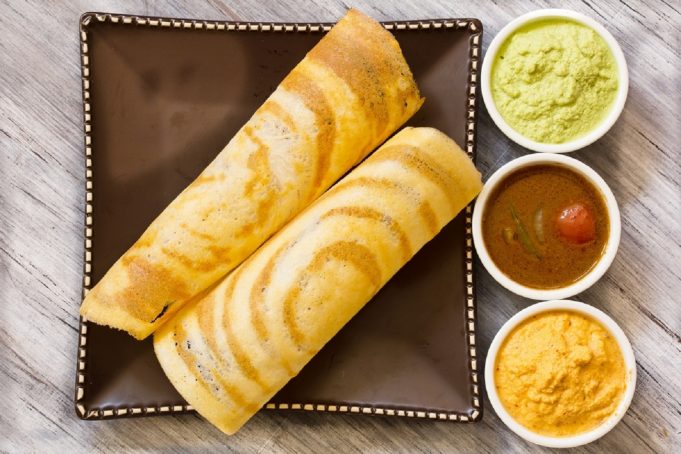 No matter where you go in India, food is seamlessly woven into and characterizes our cultural fabric. The food of each region is artful, diverse, and truly reflects the ancient history, identity and story of the region.

Take Bangalore (capital of Karnataka) for instance. The etymology of its name comes from the Kannada (vernacular of the state of Karnataka) phrase, ‘benda kaalu ooru’ which literally translates to – the town of boiled beans.

Legend has it that centuries ago, a weary king was passing through the land and stopped to rest. Having no food or water on him, he sighted an old lady by the wayside, tending to a pot on the fire. In a heartbeat, she offered to share with him the humble meal she was cooking – a simple one of boiled beans. And so, we have Benda Kaalu Ooru > Bengaluru > Bangalore – the city of boiled beans.

Well, Karnataka sure has journeyed a long way from boiled beans, so let’s take a look at the delicacies the state has to offer:

1. Neer dosa: A delicate, thin crepe like dosa made from rice on a specially designed pan. Neer dosa, or ‘panpale’ as it is called locally, is a favorite breakfast item in many parts of Karnataka, especially along the coast. It can be eaten with any curry but goes best with coconut preparations of meat or seafood; it is taken with coconut milk and a sprinkling of sugar for those with a sweet tooth. 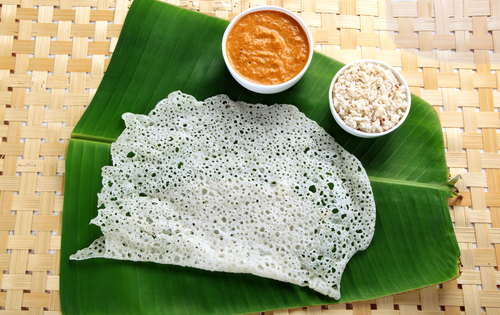 2. Masala dosa: Never underestimate a south Indian’s relationship with dosa. One of the most versatile items – with set, masala, onion, uttappam and so many other types – on a typical south Indian menu, dosa is a universal favorite. It crosses over the border and is expertly prepared by Tamilians too, but the truly special dosas from Karnataka would be ‘Mysuru Masala’ and ‘Davangere Benne Dosa’. The former is a crispy delight hailing from the royal, quaint town of Mysore – a light brown, crisp dosa, spread with a chutney made of red chili and coconut, wrapped up over a scoop of well-seasoned potato. The latter hails from a small town called Davangere and is full of buttery goodness; there is no chutney involved and it is eaten with a comparatively less spicy potato mash or as the locals say, ‘pallya’. 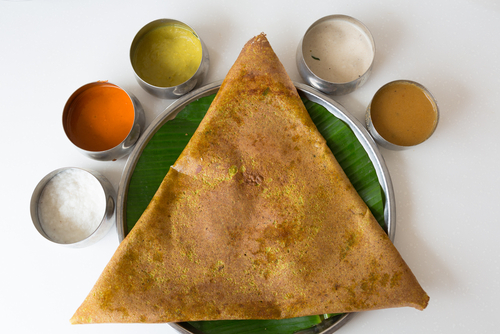 3. Dharwad peda: This sweetmeat finds its origins in Dharwad in northwest Karnataka and is nearly 200 years old. It is a dessert known the world over and is a milky, sugary delight with subtle tones of caramel; it is not to be missed!

4. Jolada rotti: This is truly the staple food of the masses, especially for their night meal. A healthy alternative to rice, atta and wheat, this roti is made from ‘jowar flour’ that is a local millet, typically coupled with a famous stuffed brinjal curry, a simple dal or an assortment of chutneys from the region

5. Bandli akki rotti: This dish is synonymous with Karnataka. It is a stiff roti made from rice and spiced with other ingredients too, literally translated it means ‘rice rotti made on a deep, rounded pan’. Taken as a breakfast item, it is one of Karnataka’s favorite meal or snack. Sure, other states are known to make akki rotti as well but the ‘bandli’ form of akki rotti that is the special way it is made on a bandli, or deep dish is exclusive to Bijapur in Karnataka.

6. Bath (rice): Go to any ‘darshini’ or local joint for breakfast and you will be confronted with an array of rice preparations to choose from. These are bisi belle bath (hot, pulses and rice), vangi bath (rice cooked with tamarind paste and fried brinjal), chittrana (lemon rice) and pulliogere (rice cooked with sour paste, seasoned with peanuts) to name a few. Most are served with a curry on the side, chutney, a yoghurt salad and/or a crispy fried item to go with.

7. Mudde: This has been nourishing farmers and manual workers since time immemorial. Mudde or ‘raagi ball’ is made of a local millet called raagi that is high in nutrition and a staple of many. Combined with any curry, from a vegetable sambar to a mutton curry, mudde could easily be the mascot for rural Karnataka! It has to be said, however, that raagi mudde is not for the weak hearted and is surely an accustomed taste but if you really want to get a flavor of Karnataka – go for it! Remember, one should not chew mudde but gently press it between your tongue and palate after having doused it in the curry you are eating it with.

8. Kozhi rotti: An absolute delight of the Konkan coast, ‘kozhi’ means ‘chicken’ and ‘rotti’ here implies a rice crispy that combines with a delicious coconut chicken curry. Exclusive to the Konkan region, this is truly something unique that is worth hunting down and feasting over.

9. Belgaum kundha: A sweet and unforgettable ‘khoa’ from the Belgaum region that is worth the calories contained in it and a must try.

10. Coorgi pork: The kodagas are the traditional hunter tribe of Coorg, known the world over for their peppery, spicy pork. Preferably eat it in Coorg or an authentically Coorgi joint so you’re sure that you will be served simply the best.

11. Sanna and pork: When it comes to pork preparations, the Konkani’s have it nailed it down. Pork in Mangalore is made in two fashions, one is the ‘baffat’ preparation and the other an ‘indaad’ The former has ‘baffat’ – a special Mangalore mixed, dry spice – as the primary flavor maker and, the latter (if made authentically, which is now rather rare), uses a few drops of pig’s blood for just the right taste. Both are phenomenal and go best with sannas, a sweetish rice cake similar to an ‘idli’.

12. Pathrode: These are steam rolls from south Karnataka, made from rice and colocaesia leaves. Perfect as an evening snack or complimentary with any Mangalorean meal, especially par-boiled rice. Pathrode can be used variously, as a fry or in a curry along with seafood or meat. An absolute favorite of the region, it is every bit of Mangalore in each bite!

13. Mysore pak: Originally from the land of the Mysuru rajas and ranis (Mysuru kings and queen), this dessert is made from generous servings of ghee, sugar, gram flour and sometimes even cardamom. Commonly, you would get a hard variety of Mysore pak which differs greatly from the original, which is the soft, crumbly, doused-in-ghee version that enjoys a grand global reputation! 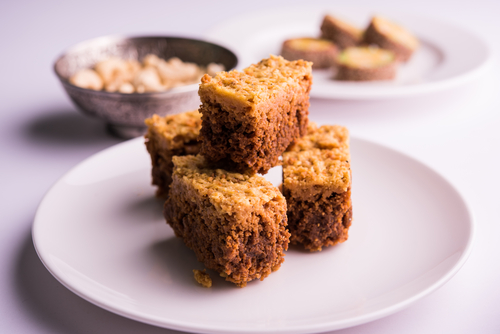 14. Chirotti shavige: Just thinking about this famous treat makes our heart flutter. A compulsory accompaniment at wedding meals – elaborate or not – chirotti is a flaky, buttery, fried flat bread that is eaten with a sinful helping of flavored milk. The milk is your typical ‘badam milk’ with a variety of dried fruits and kesar that is utter indulgence!

15. Obbattu: This is a sweet south Indian flatbread that has a special variation in Karnataka where it is made with crushed pulses, sugar (or jaggery) contained within a thin coat of atta and fried, eventually resembling a chapatti. The right way to eat it is fresh, hot and doused with milk.

16. Rava idli:
There is an interesting story behind its origin. Mavalli Tiffin Rooms, or what is more commonly known as MTR, has been the master of south Indian cuisine since 1924. It was at the peak of World War II that South India underwent a shortage of rice. To counter the problem, MTR made a variation of the popular idli by substituting rava (semolina) for rice, and lo and behold – the rava idli was born. Taken with coconut chutney, a tasty vegetable ‘saagu’ on the side and a dollop of ghee to top it off – rava idli is a popular breakfast item loved by all! 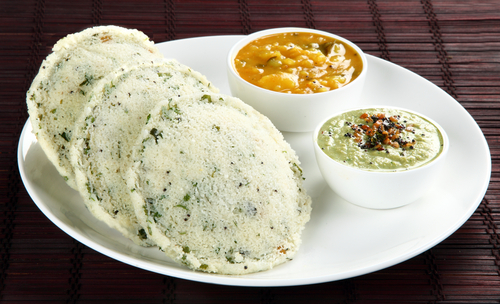 So, all set to try these delicacies of Karnataka? Then allow us to make it even more special, because with every bite of whatever it is you are exploring, you’ll experience the culture of the region neatly wrapped in a time-tested delicacy – enjoy!

25 Small Things to Do Every Day to Become Healthier

Give Your Skin a Break with a Makeup Detox

Expressive Arts Therapy and Its Benefits

The Goodness of Tulsi